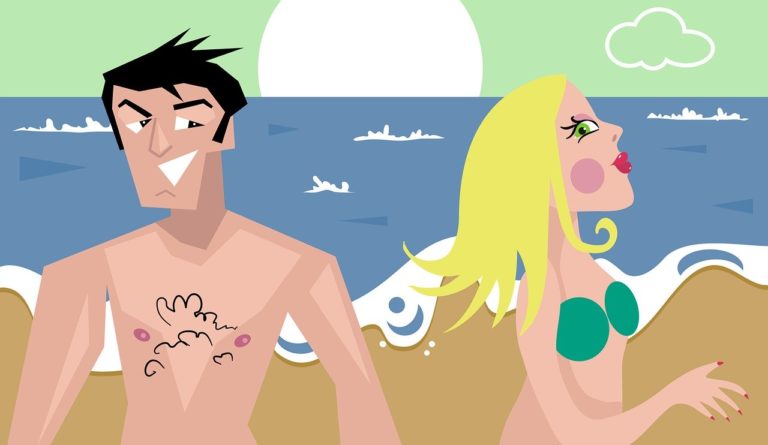 I hope our WildOne’s enjoy this article. I had originally written this on February 25, 2018 but the 5 motives for Flirting and why it’s good for you is appropriate today as it was then.

I was originally going to title this post: Did the “F” word kill my imaginary future grandbabies? I had gotten a call from my son that he and his significant other broke up because he caught her “fffffff…”

The look on my face must have been comical because I could feel one eyebrow shoot up to my hairline. For real, son? FLIRTING?

While he nursed a broken heart with “righteous” indignation, anger, and sadness, I wanted to mock him for being a dumbass. What can I say? I really liked this girl. Plus, having been married to a cheater, I have a NO TOLERANCE policy on f*cking other people. Getting caught committing this particular “F” word… Well that seemed like a very inadequate reason for a break-up… unless they actually wanted to break up, in which case, any stupid reason will suffice.

Why Flirting is Good For You

According to Psychology Today

Scientists have proven that flirting releases adrenaline, dopamine, seratonin, and endorphins. These are the natural chemicals your body creates for happiness and euphoria.

Some people argue that flirting is the gateway to cheating especially if you’re in a committed relationship. Perhaps. I suppose it’s good or bad dependent on one’s motive and how solid the relationship is to begin with.

Motive 1: Flirting to have fun and boost self-esteem

There is no other motive beyond tapping into those feel good chemicals to boost one’s self-esteem and have a little fun. Whether you’re the flirter or the flirtee, the back and forth banter affirms our ability to be playful and witty; it allows us to relax, feel sexy and appreciated while basking in someone’s attention.

If you’re in a committed relationship, bringing positive energy from back home after a little flirty fun can make us feel a little more amorous toward our loved one. For single people it’s a great way to gauge their chances in the dating scene. Flirt first. Better your chances for a yes when you ask them on a date.

Motive 2: Flirting as a tool

We all use flirting as a tool as a means of getting our way.
The retail world is full of serial flirters. Bartenders, waitresses, car salesman…
They flirt to get the sale, a better tip, or developing a repeat customer. One of my real life examples is below.

An older lady walked into my store. She was obviously having a bad morning. You could see by the look on her face that she was not happy. In fact, she was downright crabby. As we put together her order I said, “Come here a second.”

She gave me a sidelong scowl but stepped a little closer to the counter.

“A little bit closer,” I said.

And just as she was saying, “What are you…” I pulled a price sticker off of her blazer.

She blushed, then laughed. Maybe it turned her day around. I don’t know. But I felt good about making her smile.

The pretty pout is another form of flirtation. It emotes vulnerability, sadness or displeasure while still being cute and approachable. And who could resist saying no to this?

Motive 3: Flirting to get to the next level

If one is in a committed relationship and flirting with someone else with the intent to build a nest elsewhere then yes, flirting is the beginning of the end. In such cases flirting did not kill the relationship, it’s just one tool in the heartbreak arsenal.

Flirting can be a powerful tool in keeping a long-term relationship fresh too.

I give my husband a wolf whistle when he’s getting ready for work, or try to grab his towel after he gets out of the shower. After knowing him for 30+ years and being married for over a decade, I can still make him blush.

And he uses this line on me all the time:

He knows this cheesy 80’s movie line makes me laugh, especially after crawling out of bed with my hair sticking up and growling like an ogre.

There was a point in time when I was working 7 days a week. I saw my co-workers a lot more than I saw my family and developed a great relationship with a man I worked with. We laughed. We commiserated. We flirted all the time. He made me coffee. I brought donuts or snacks. We talked candidly about our lives outside of work: the frustrations and the joys.

To this day I still refer to him as my work husband and I love that man — but our relationship was never about sex. It was more like two survivors in a life boat looking out for one another. It made a stressful job and the hours we put in bearable.

Coincidentally, my husband has a couple of work wives (and a few work ex-wives) to keep things spicy.

I guess the not-so-secret ingredient here is

because in the end…

The pitfall of flirting

Yes, there are pitfalls to flirting too.

As mentioned above, if you do not trust your partner implicitly then flirting might be on the NO-NO list. Communication is key.

Other hazards might include being tazed for being a creepy stalker or flat-out rejection.

Going back to the death of my imaginary future grandbabies…

What’s a mama to do? I know I can’t get involved because it’s not my job or responsibility to salvage his relationship. All I can say is that I like her. I personally don’t think she did anything wrong but that’s not my call. If it’s over between them then I need to lay to rest the imaginary brown hair, brown-eyed grandchildren bouncing on my knee.

That’s too bad… She makes a really awesome Pasticho Venezolano too.

Maybe I don’t have to break up with her? #BadMama

What are your thoughts?

Is flirting good or bad? Leave a comment below.

UPDATE – My son is now married to this lovely lady and my first grandchild is expected some time in December 2020. I knew he was a smart kid. #Grandma2B