Get Over Your EX – OUT Emotion to INdifference 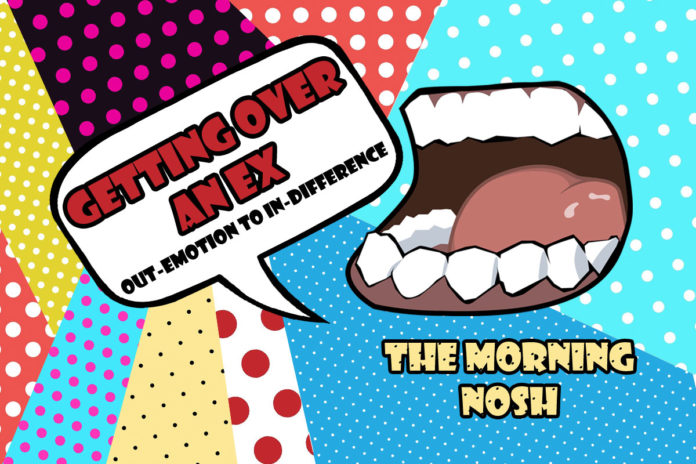 Get over your EX! Yeah, yeah. That’s easier said than done, isn’t it? Trust me, I’ve done it on more than one occasion but I’m not talking about just an ex-boyfriend or ex-husband. I’m also talking about a former job or falling out with a friend. It could even be letting go of a dream.

So how does one get over an EX?

When I was separated, then newly divorced from my first husband, my emotions were very high. I basically went through all five stages of Kubler-Ross’s five stage model of death and dying. Some refer to it as DABDA, the acronym for denial, anger, bargaining, depression and acceptance.

With my marriage, the stages of dealing with my ex kind of looked like this:

BARGAINING: “Is there a way to make this work?”

Not so surprisingly, I’ve had these same emotions when I’ve lost a job, was looking at foreclosure on my house, and watched my children grow into young men, spread their wings, and leave the nest.

When I Knew I Was Over My Ex

I can’t say that I remember the date or even the year but my boys were still school-aged. My ex called to ask about their progress and wanted to talk to them and I was like, “Sure. Hold on.”

And as I handed the phone off to my children I was a little surprised that I felt… nothing. No anger. No animosity. No resentment. NO THING.

Huh. Maybe I was just tired or something.

The next phone call – same thing. Then seeing him when he was picking up the boys… NOTHING.

At some point I had finally crossed over to indifference. The negative emotions of my former life were gone. I was free and it was, well, not exciting at all. That sounds weird especially with the history that we had but that’s where I was – INdifferent.

Listen to The Morning Nosh

The Morning Nosh is a short podcast with new episodes that post Monday through Friday. Meredith shares anecdotes, stories, and messaging to help you through the day. Visit our WildOne Forever Podcast page or listen on the iHeartRadio app.

I think the most ridiculous EX that seems to come back like a bad itch is when I was fired from a no-skill job because they were offended when I mentioned a safety hazard in the workplace. They told me they I might be detrimental to their customer service. That still bothers me to no end because it’s SO ridiculous that I’m offended to this day! Maybe it’s an ego thing but that chaps my ass.

SIGH. NOT indifferent because I’ve still got an emotional response. See the difference? Quite honestly, I got over my divorce faster than that job. I guess the former was decisions I made and the latter simply insulted me and questioned my integrity – which is not forgivable. There is that…but probably a topic for another day.

I digress, the key is TIME to handle your emotions. Eventually you will be in a place of indifference when you think back about the situation or person. That’s when you know you are over your EX.

Previous articleThe “Haters” Might Be Right; Maybe You Do Suck!
Next articleLearn to Make the Most of Your Passions Now