I’ll bet you have heard that Toxic Shock Syndrome (TSS), can be attributed to leaving a tampon in too long. Many of us girls are frightened to hear that TSS can be fatal, but in fact, few women die each year. In all actuality, TSS is caused by Staphylococcus bacteria — specifically Staphylococcus aureus and Streptococcus pyogenes.

So, Let’s talk about the truth. TSS is actually more complicated than tampons. It turns out there’s a lot about this medical condition that we’re probably getting wrong.

Here’s what we need to know about TSS, including what causes it, and how common it really is.

Everyone knows that you do not leave a tampon in too long, or it can lead toToxic Shock. The Mayo Clinic says Toxic Shock Syndrome is actually caused by Staphylococcus bacteria, as mentioned earlier. Staph can be found on any human nostrils, throats, vaginas, and rectums. The problem lies in allowing it to multiply rapidly. The tampon can create a favorable environment for bacteria growth. Leaving one in too long, I mean.

When the Staph bacteria flourish in the vagina, they release harmful toxins into your your blood. This is what causes Toxic Shock Syndrome. You don’t have to have a vagina to get TSS. The majority of cases are linked to burns, skin infections, insect bites, and surgical procedures. Complications from childbirth are also a significant risk factor.

What Are the Symptoms of TSS?

You would think that since you likely contracted TSS vaginally, you would have vaginal symptoms. Right? The answer is no. Most cases feel something like the flu and take 2 or 3 days to develop. Common symptoms include fever, rashes on your hands and feet, low blood pressure, confusion, aching muscles, diarrhea, vomiting, and seizures. Of course, all infections have different severity and symptoms may appear sooner or later.

If you notice these symptoms and believe you might be dealing with a case of TSS, it’s important to get to a doctor as soon as possible. Sooner, better than later.

You can get TSS more than once

One myth about toxic shock syndrome is that, since it’s caused by bacteria, having the condition once will give you immunity against further infections.

Sadly, this is not the case. According to the Mayo Clinic, people who have had TSS once can get it again. In fact, it is recommended that people who have previously had Toxic shock syndrome or a serious staph or strep infection discontinue their use of tampons.

The more the bacteria can replicate itself allowing the infection to grow, the worse the TSS is. A super absorbent tampon has more surface area to contaminate.

Even though it’s unlikely you’ll contract TSS from tampon use, opting for tampons with a greater absorbency than you need isn’t a good idea either.

Women with light flow are discouraged from using regular or super absorbency tampons.

That’s because some women think that tampons with more absorbency will need to be changed less often. This belief can even lead women with light flows to leave a tampon in all day because they assume using one super-absorbent tampon is the same as using two less-absorbent tampons.

It’s important to choose tampons appropriate for your menstrual flow and to change them regularly.

All This Can Be Overwhelming

Though you may have been traumatized into thinking TSS is common, it isn’t.

You’ve probably heard that TSS can be fatal. That’s definitely true, but it’s not the whole story.

The risk of dying from TSS is actually pretty small. However, that doesn’t mean that TSS isn’t a serious medical condition. Proper hygiene and making good choices around tampon sizes and general wound or burn care can make a big difference. 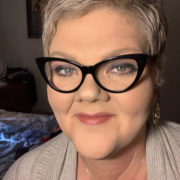 Brenda Holman is a professional artist and contributing author/ blog writer for Wild One Forever. She has written blogs for Diabetes and the Eleven Mighty Laws helping fellow Diabetics achieve their health goals through positive thinking and exploring their spiritual strengths. Brenda is insightful on many aspects of Mental Health and Depression, PTSD, Chronic Pain, Grief, Recovery, Abuse and Women’s Issues. She is passionate about helping women overcome blocks through a positive outlook and spirituality.

Let's Get Some POSHGLAM With Kimberly E. Stone