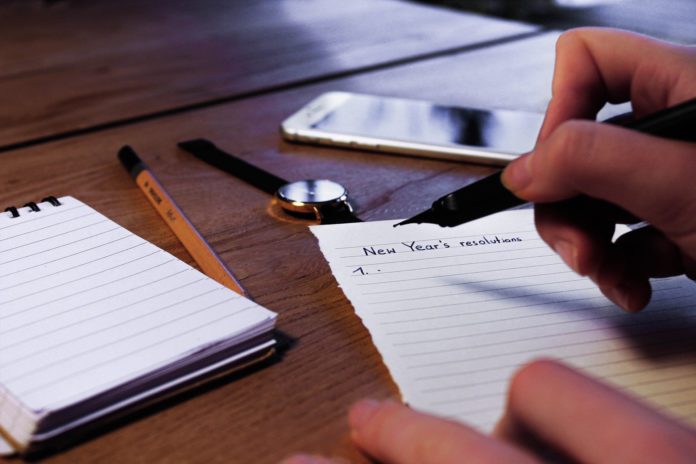 Why am I talking about New Year’s Resolutions now? After all, New Year’s Eve is about three months away. Three months is not that long a time, and provides you with a chance to review how you are doing on the resolutions you made last year.

Yeah, I’m not doing so well either.

I’m not saying we never meet our resolutions, but most of the time, we just don’t. We do a great job for a few weeks or even a couple of months and then our goals slip under the RADAR and are forgotten until sometime around Christmas when you realize that you aren’t going to make it and, at that point, why even try?

I don’t want to disillusion you, but here is the truth…

Come closer. No, closer! I want to whisper in your ear.

When you make your resolutions, whether on New Year’s Eve or New Year’s Day, you make a list of the changes that will make your life “perfect” by the end of the year.

Have you ever made the same resolution several years in a row?

Why do we force ourselves to come up with New Year’s Resolutions? Would you feel embarrassed if someone asked what your resolutions are and you hadn’t made any?

Making New Year’s Resolutions goes back to Ancient Babylon when the idea was not to make promises to ourselves but to the gods for better behavior in the coming year. The same was true in Rome, and early Christians had similar practices. But none of these promises involved personal changes such as losing weight or running every day.

The resolutions we make these days are mostly lies. We are lying to ourselves and everyone around us when we vow to lose 60 pounds in a year or learn a new word every day. We seldom think these things through but once you’ve announced your resolutions, you have to keep them.

What would happen if we just decided not to torture ourselves every year by making promises we know we can’t keep? Suppose you decided to save yourself the pain of making those promises and simply dropped the whole New Year’s Resolution thing once and for all?

Wouldn’t that feel wonderful halfway through the year when you didn’t have all those promises hanging over you?

Give yourself a break! It’s a little daring, I know, but why keep doing something that you know isn’t working? You do know what they call that, don’t you?

Don’t think I don’t want you to improve yourself! But I think we need to find another way to go about it.

If You Do It, Do It Right

If you feel that you have to make New Year’s Resolutions, plan them now. The holiday rush now starts in October so maybe you should too.

Think about what you want to accomplish next year. Don’t make sweeping pronouncements; be specific! Most resolutions fail within the first month. Why?

Many resolutions are to vague. I’m going to get in shape! What does that mean? Does it mean that you will be able to walk two blocks without being winded or that you want to be able to run a marathon?

Then again, other resolutions are too drastic. I will lose 30 pounds by the end of January is a great goal, but it’s a little unrealistic! I’m not saying it could never happen, but maybe make the goal to lose five pounds or ten. No law says that you can’t do better than your goal, does it? Would you have to gave back 15 pounds if your goal was to lose 10 pounds and you lose 25? Of course not!

You get the idea. Figure out what you want, and then think about how to get there. Those are the resolutions you need to make. Whether you do this now or on New Year’s Eve/New Year’s Day, write down the steps to reach your goal.

Now you’ve got your list. This is the crucial step! Don’t put the list away somewhere until next year. Keep it in front of you. Check off each of the steps you complete. Review it weekly or monthly and see how you are doing. Maybe you need to make adjustments but it is going to be far more likely that you’ll meet your goals or be well on your way to meeting them if you pay attention to them year round.

I have nothing against self-improvement but why not start now?

The time has come to make a change that you can live with! New Year’s Resolutions may be bullshit, but you can change your life if you want and, hey, why not give it a try and see how far you can get in three months. I dare ya!

Previous articleFriday Five: Five Ways to Treat Yourself This Weekend
Next articleHealing From An Abusive Relationship. Will It Ever Get Better?

Denise Warren
Denise Warren is a gamer and all-around techno-geek, a condition that is hard to escape if you grow up in the Seattle area. She is a UX Consultant and Freelance Web Designer. She discovered computers in the early aughts and was hooked by the time she was in 8th grade. Denise currently lives near the Microsoft Campus in Redmond, Washington with her husband, Patrick.