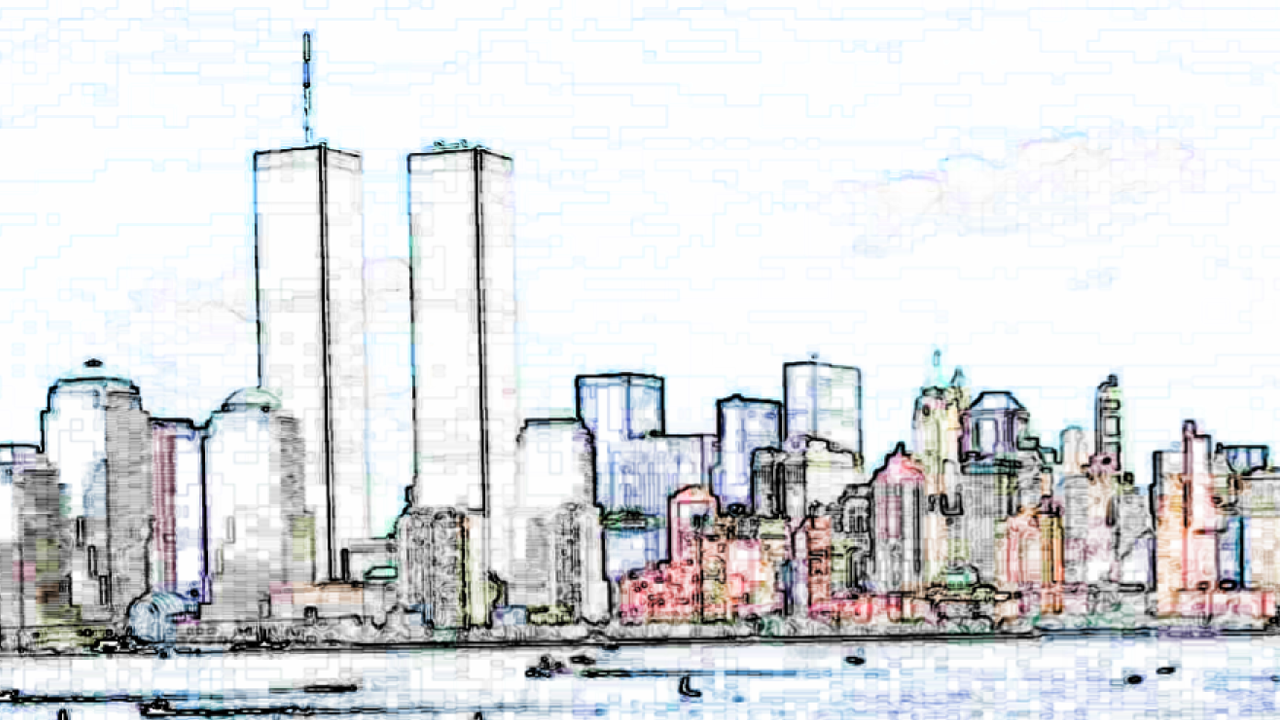 I wrote this in 2015 and it is still timely and just as painful. These are my reflections of that terrible day.

It was the morning of September 11, 2001 – a morning like most others.  At the time, I was divorced with three small children and living with my parents.  That morning, I put my oldest on the school bus and began to prepare breakfast for the two little ones.

Normally, I do not watch television.  I happened to be flipping the channels when I saw the newscasters giving their daily offering when, in the background, I heard a loud BOOM and saw smoke coming from one of the Twin Towers.

I saw the confused looks as the reporters turned in their seats from atop the…  I think it was the Chrysler Building.  There was speculation – was it a small plane that hit the building?  In the back of my head I knew it was much bigger.  Small cessnas did not make such a BOOM.  Reports began to filter in – but no one knew what was really going on.  Distant sirens could be heard from the street through the television.

Suddenly, from the right of the TV screen I saw another plane.  It was strangely low in the sky.  And on live television I saw it fly into the other building; the impact, explosion of fuel and the smoke. I couldn’t breathe as I stood frozen to the spot.

WHAT THE HELL IS GOING ON!?

Close ups of the devastation started coming over the tube as cameras were zooming in.  From afar I saw the Twin Towers on fire.  Strangely, I felt a deep sense of pride that they withstood such a beating!

Word came across:  they were passenger planes.  I was transfixed.  I could feel my heart beating like a dull thud in my chest.  Tragic.  Terrible.  Beyond Words.  My sole focus remained on The Towers.  They were still standing.  We’re going to be okay.

But then it started to crumble…  Tower Two was tumbling down!  In my head, all I could do was scream silently.  Screaming out loud would have scared my babies.  One tower was left.  Goddammit, we still had one. There was still hope…until that too began to crumble.

It was all I could repeat. My middle child came to me and hugged me. He had no idea what was going on but he was scared. Holding him finally awakened me. I had to know if my father was okay.

My father commuted to New York City every morning, taking NJ Transit to the PATH trains; his last stop was the basement of the World Trade Center.  From there he usually walked about six blocks to his office building.  Oh fuck!  Where’s dad?  Where’s my father!?

I tried calling and feeling panic with every failed attempt. All phone lines were busy.  No one was getting through – not even to make a local call.

Newscasts showed falling debris prior to the building collapses – but it wasn’t debris.  No…  They were PEOPLE.  People who would rather jump to their death than burn in the fire.

The television was in an incessant loop:  the impact, the smoke and fire, the rumble of the earth; the clouds of smoke and ash; debris and people falling.  Buildings gone.  A mass of people covered in ash looking for their way out of the city…and I still had not heard from my father.  I was glued to the television hoping upon hope that I would catch a glimpse of him on the small screen. Maybe he was one of the pasty people, shell-shocked walking across the bridge.

Back at home, people drove to school to pick up their children; a need to be closer to them because there was going to be bad news – not on a national level – but a real, personal level.  A whole lot of loved ones were not coming home again.

My town is 40 miles north of New York City.  Our community is laced with NYC Firefighters, EMTs and Police, doctors, nurses, military, white and blue collar workers – we have them all.

With children close to our breast, we all waited for news; waited for the phone lines to clear up and make a connection.  Still there was nothing.

It was after 5 PM.  My father had borrowed a stranger’s cellphone to tell us he was okay.  I say “stranger” loosely because everyone in the city became brothers and sisters.

He was one of thousands that walked to the ferry boats transporting them to the Jersey side.  Transportation out of the city was still being figured out – but he was safe and he would be home soon.  Soon was about midnight.

I was lucky.  My father came home that day – but I will never forget, for weeks to come, the hundreds of obituaries that filled our newspaper – all local men and women – all innocent people who went to work like any other day.

In the small town of Washingtonville, NY where I lived for much of my life, we lost five brave men. They are: Battalion Chief Dennis Devlin; Lt. Glenn Perry; firefighters: Robert Hamilton, Gerard Nevins, and Mark Whitford.

We will NEVER forget…

…but some people have.

In a photo journal dated July, 2020, vandals took a saw to the flag pole at this memorial and cut it down. They also knocked down the sign for a nearby preschool.

To date, I have been unable to visit New York City and see the monument. I still no not recognize the new skyline. What’s even more painful now is that my father has since died and I still harbor so much grief.