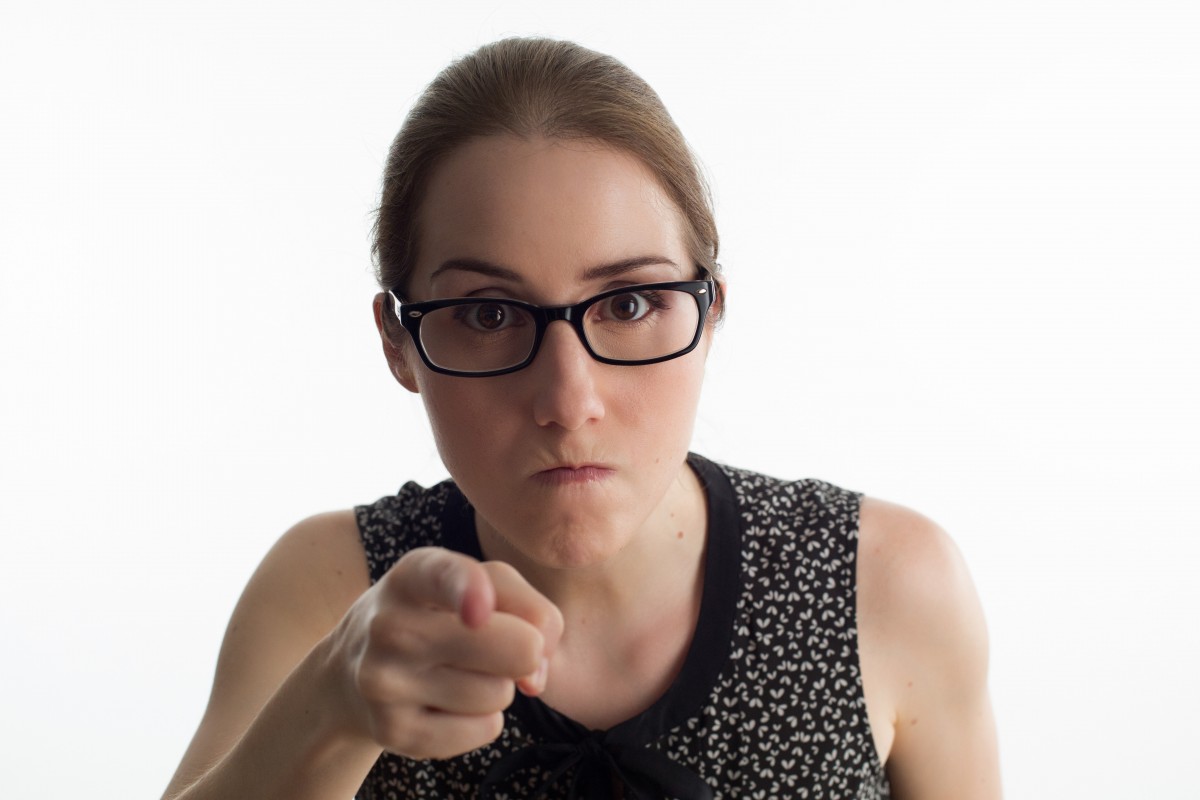 C’mon now, you didn’t think WildOne Forever was going to be all about roses, hand holding, and coddling did you?

Well if so, you were dead wrong.

We want to motivate, inspire, inform, and help you live the best life possible and that means being honest. It would be a total disservice if we always told you that you’re perfect, he’s an asshole, and you’re never wrong. That would mean you’re going to keep making the same mistakes over and over.

If you see behaviors below that are a little too familiar, then he probably left because you’re a Bitch.

If you were proud to have his balls in your purse at all times, that’s a pretty good indicator that you’re a Bitch. For most men, there’s nothing that will make him leave you faster than emasculating him.

Now, I don’t mean that asking him to hold your purse every now and again is horrible; this is about castrating and forcing him to eat his balls for dinner. If you truly think that allowing him to open car doors for you, paying for dinner, or otherwise taking care of you makes you weak, you’re going to push him away sooner rather than later.

I know, I know, you’re a badass that can take care of herself, but that doesn’t mean that you can’t allow him to care for you too. It also means not flirting with his friends, or flaunting the fact that other men flirt with you.

NEVER tell him to “man up,” doing so makes it seem like who he is isn’t enough. It chips away at his manly pride and have him questioning why he’s with a Bitch like you.

All too many men think they’ll be mocked if they report their partner for dating/domestic violence and so most of these incidents go unreported. However, in reality it is just as wrong as when a man hits a woman.

Your supposed “weaker” status doesn’t mean that it’s okay to use him as a punching bag. So while those punches, hits, and slaps may not hurt him as much as it would if he did the same to you, it’s still not alright. There’s a huge difference between a playful swat on the ass and bitch-slapping him in anger.

Getting angry and screaming/yelling/shouting is one thing, but no man should tolerate uncontrollable rage that results in physical violence. If you’re hitting him, then I’m sincerely glad he left you. Don’t even try to tell yourself that he only decided to leave because he couldn’t handle your strong-will; he left because you’re a Bitch.

Constantly putting anyone down is wrong, let alone the one you’re spending your life with. Ripping him apart is just plain evil.

By berating, I mean those backhanded insults about getting him a gym membership, needing to “man up,” bitching about how much money he makes, or that his current job wasn’t supposed to be a career.

This also pertains to the way you address his annoying video game obsession. If you’ve ever said things like, “Your lazy ass couldn’t stop playing for 10 minutes to do the dishes or start a load of laundry? GOD, you’re such a loser!” That could be a clue to why he’s gone.

This type of behavior isn’t a motivational moment.

Verbal and psychological abuse can be almost as damaging as physical abuse and if you’ve been treating him like this, then you’re a Bitch and there’s no questioning why he left.

When it comes to being a bold and secure woman, the green-eyed monster isn’t attractive at all. If you can’t trust him enough to fight off all those women you think are throwing themselves at him every day, then trust is a huge factor and the relationship is unlikely to ever work out.

Your jealousy will most likely lead to smothering; demanding that he ditch all his female friends and giving the evil eye to any woman that comes within 20 feet of him. Sure, some guys find it endearing when their significant other is all “territorial,” but those guys are clearly insane. It’s not cute nor sexy and this behavior of constantly accusing him of sleeping with every woman in the city will likely push him away and he may actually sleep with that cute waitress that’s always flirting with him.

You love you and you want him to love you just as much as you do. You want him to tell you how much he loves you as often as possible, and show you twice as much. If you make everything about you; i.e. consistently refusing to listen to what he has to say and you always redirect the conversation back to you and your problems, is it really any surprise that he left you?

Being a selfish bitch doesn’t simply mean that you want all the attention, it’s also about not reciprocating. Contrary to your beliefs, you aren’t the center of the universe and you shouldn’t be treated like you are either. If you expect him to be at your beck and call and basically worship the ground you walk on but you never show him how special he is, then yeah, you’re a Bitch and that’s why he left you.

He’s Not a Priority

Sure, he wants some of your time but you’ve got other things going on in your life and making time for him just isn’t a priority. When you make him feel like he’s something you penciled in on your weekly to-do list instead of the man you love, he won’t stick around long.

Can you blame him? Now, I’m certainly not saying that he has to be the center of your universe, but he should at least be a priority in your life. You shouldn’t have to make time for him, you should want to.

Furthermore, spending time together should be a mutually enjoyable experience and he’s going to be able to tell when you’re there in person, but not really “there.” If you’re with him but constantly on the phone or checking your social media updates, don’t be surprised that when you finally look up, he’s gone.

Can you remember the last time you had sex? When was the last time you initiated it? Do you use sex as a treat for him being a “good boy?” When the sex completely dries up, he has to “earn” it, or the bedroom has gotten mechanical and boring, there’s a good chance he is going to stray or end up leaving you.

This also goes for blow jobs ladies: give them!

Before you start screaming at your phone or computer screen, I’m not talking about the traditional roles like making dinner, grabbing him a beer every time he asks, or rubbing his back every night. I’m talking about your role as a girlfriend, lover, friend and partner.

When you’re in a relationship, you’re supposed to be a partner, a team member, that’s on a journey together. When you leave virtually everything to him, it’s only going to be a matter of time before he grows weary of that role. In a relationship, no one wants to feel alone or like they’re the only one working to keep things going.

If you went through this list and are guilty of even one of these transgressions, you have some serious self-reflecting to do. If you see three or more, you should probably be single until you figure out your priorities.

If you see yourself in these and you’re lucky enough to still have your man sitting next to you, maybe it’s time to open up and have an honest discussion about your relationship.

Ignoring the signs that you’re a Bitch will not lead to anywhere good for the relationship. If he hasn’t left yet, it’s probably only a matter of time. Honestly, even if he doesn’t leave, can you honestly say that you’re treating him fairly? Be honest with yourself and fair to him. Either check back in, or get the hell out, Bitch.