How many times have you been told, “Don’t settle!”

On the other hand, has anybody ever told you what that means?

I didn’t think so. And that can leave you in a situation where you go to one extreme or the other and, sometimes, you end up settling after all.

We feel that the perfect partner is out there. Trouble is, this leads to sitting back and waiting for him or her to come along. What’s more, we put so much emphasis on perfection that we don’t stop to think about what makes a healthy, happy relationship. The most beautiful person in the world is worthless if they are also a selfish mess who abuses you physically or emotionally.

In addition, your dreams of perfection can cloud your vision. The man you’ve been dreaming about could be standing in front of you, ready to love you for who you are, but if you haven’t allowed yourself to be lovable, to be the type of person that man or woman is looking for, oh well!

We talked about perfection before here on Wild One Forever. Maybe by now you realize that it doesn’t exist. On the other hand, you really need to pull your head out of your own ass. Figure out how to do your own part in achieving that “no settling” relationship. If you keep thinking that it’s all about you and that your partner has all the responsibility for keeping the relationship good, all I can say is, You’re a Bitch, That’s Why He Left.

I mean, seriously, how can you demand something of your partner that you don’t also demand of yourself?

Now drop all that baggage you’ve been dragging around with you. It’s heavy and might keep you from seeing and appreciating something special. You have to learn to deal with all the crap you’ve been throwing at your relationships even if that means getting therapy or joining a support group. Think about it. People won’t hang around long with a partner who can’t trust, who plays games, or who manipulates them in sneaky, self-serving ways. Stop it!

Nobody is going to give you the best they have to offer if you’re not doing the same in return. You have to give to get, after all.

So, now that you know what you have to do in order to be ready for that great love, let’s talk about finding your mate.

The Time has Come to Stop Settling

Pick up your list of perfect features, perfect attributes, and perfect careers. It’s right over there next to the list of things you want to change about yourself. Yeah, that’s the one. Pick it up and then rip it into a thousand tiny pieces. Don’t flatter yourself that you are so clever, you know exactly what you want in a mate.

You cannot choose the person you will love.

If I asked you to describe your perfect mate, what would you say? If the answer falls anywhere near “tall, dark, and handsome” I might ask how many of those men (or women) you meet on a daily basis. By the way, I promise not to laugh too loudly when you marry short, blond, and funny or even fat, bald, and forty.

And ladies, even if you think that turning those less than perfect people away without a closer look isn’t settling, you’re wrong. Maybe you’re too picky! You’ve set yourself a goal that nobody will ever meet and effectively taken yourself out of the running. Just stop it! Having preferences is one thing, dreaming the impossible dream is another.

Be open to the people that come into your life and never, never write them off because they don’t have one green eye and one blue eye. I guarantee that you don’t know exactly what you want until you find it.

I know, I just told you not to be too picky and now I’m saying don’t ignore the negative in your your potential mate. But some things should never be ignored.

When you’ve just discovered the new love of your life, it’s easy to ignore things that you would normally not tolerate. Much as you would like to think otherwise, however, these things are going to annoy the hell out of you ten or twenty years from now. Then what are you going to do about it? Kick them to the curb and start again? Hardly. Then again, maybe it’s time to consider doing just that before you’ve committed to a lifetime.

There may be traits, likes, or dislikes that are mildly annoying now. In a few months or years, it’s going to be impossible to ignore. You might not be able to stand it and it would be a shame to break up a happy family because your spouse goes around whistling tunelessly all the time. I’m not telling you to break it off instantly, just think about how you’re going to feel about some of those drawbacks twenty years from now.

On the other hand, there are some behaviors that should end a relationship instantly. Do they have anger issues? Have they ever hit you in anger or tried to force you to have sex with them? You know violence and abuse aren’t traits that will magically go away. No matter what you think, you need to get out while you can.

Most people hesitate to end a relationship right after it starts. But, like I said at the beginning, be brave. Sometimes ending a bad relationship just makes room for a partner who will be a true partner. And if they think you’re sexy as hell, that doesn’t hurt either. For every plus, there’s a negative. I’m not giving you an excuse to end every relationship.

Balance! It’s hard to be logical about romantic relationships. Just do the best you can and don’t blind yourself to the consequences.

Never Give Up, Never Surrender

Maybe not. It’s always possible that you won’t find the person of your dreams. But, until you’re no longer on this Earth, keep looking. You never know what you may find.

“Maybe I’m not the love and marriage type.”

“There’s just nobody out there for me.”

Again, debatable. There are probably a dozen people with whom you could have a happy and lasting relationship. Not all at once, of course, but that’s another story.

If you persist in repeating the negative, guess what? You’ll get exactly what you asked for and the only person to blame is you. Grow up! Remember that the one true thing in life is that things change. Keep your options open.

Love is a Full-Time Job

Remember, it’s easy to fall in love, it’s much harder to stay that way. In order for your love to stand the test of time, both partners need to work at keeping the romance alive and vibrant. That means you too, if you didn’t get that point.

Put all of the responsibility on your partner and be prepared to watch them walking off into the sunset. A dear friend of mine once said that a good relationship doesn’t necessarily mean both partners working equally. Understand that there will be times when one or the other carries most of the weight. But no matter what, make sure that you don’t expect to be carried forever.

It takes time to find the person you want to make a permanent part of your life. Once you’ve found them, accept the fact that you both have to work to make it worthwhile.

I’ve talked about not settling, about knowing what you want and going after it. I’ve also talked about making a realistic decision about “what you want. Finally, let me remind you that when you settle for less, you are also preventing yourself from finding the right one if and when they come along.

Don’t let the fear of being alone keep you from finding the right person because you’ve settled for the person who is right here. Sometimes you have to settle for what you have, but settling in love is something nobody should ever consider.

And Wild Ones, like you and me? We never settle! 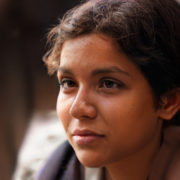 Gigi Brendan is happily single. She lives in New York City, in Chelsea with her cat, McGonagall, and a huge collection of Romance novels. By day, she is a Product Manager for a small start-up company and by night, she writes about relationships and dating.

The Power of a Gift