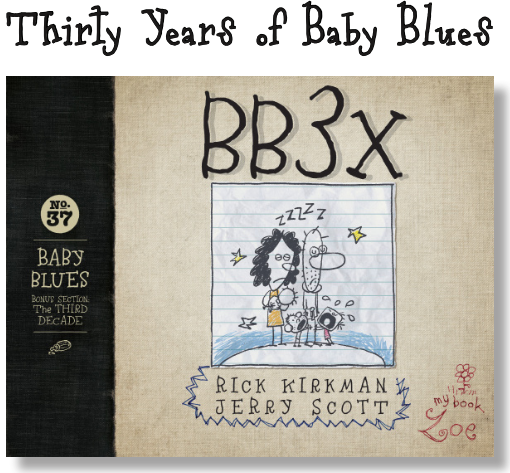 BB3X ($19.99, October 2020) is a special Baby Blues treasury that celebrates three decades of one of the most heartwarming, funny, and true-to-life depictions of raising children ever seen in the funny pages.

In addition to a year’s worth of Baby Blues comics, this special collection sheds light on the unique collaborative process of Rick Kirkman and Jerry Scott, whose cartooning magic has helped transform some of the most stressful moments in life into some of the most hilarious.

The book includes a forward from Rick, a reflection by Jerry, and a special “scrapbook” section of archival photographs, memorabilia, sketches, and commentary from the duo’s three decades of Baby Blues collaboration.

Jerry Scott and Rick Kirkman launched Baby Blues in 1990, and today the strip appears in over 1,200 newspapers in 28 countries and 13 languages. They have each been awarded the National Cartoonists Society’s Reuben Award for Best Cartoonist of the Year. Jerry is also the co-creator of the syndicated comic strip Zits. He lives in central coastal California, and Rick lives in Phoenix, Arizona.