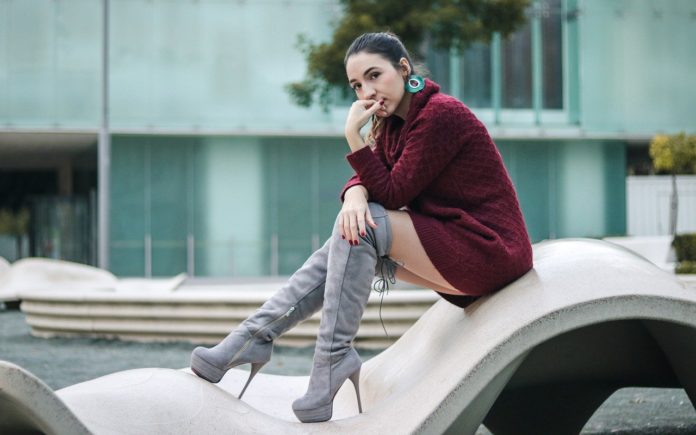 I’m totally taking this from a Cosmopolitan Magazine article (April 2011) where they did an interview with one of my favorite actresses, Olivia Wilde and shared her Confidence Manifesto. She wrote this and I really wanted to repost it because if you’ve ever had a boyfriend, husband or significant other who complains about why you buy so many damn shoes and spend a lot of money, you can point them to Olivia Wilde’s wise words and how amazing shoes can make her feel.

Just so you know, it’s not 100% about the shoes per se because I am the same person with or without shoes but they can be a reminder to be the best version of yourself when you’ve got on some sexy Sergio Rossi’s.

“On a recent glorious day in New York City, I was standing outside my apartment building feeling pretty fantastic when a 75-year-old lady with purple bifocals, a matching muumuu, Einstein’s perm, and sensible white sneakers stopped me, grabbed my hand, and said in a Brooklyn accent only Gilda Radner could mimic perfectly, “Oh! Those heels! Your feet must be dying! Who are you wearing them for? Dress for you. Don’t worry about what anyone else thinks.”

“I guffawed like she was just the most adorable and hilarious stranger to ever offer advice. My 3-inch Sergio Rossi ankle booties are an undeniable win. But really, who was I wearing them for? I suppose I wear them because I believe myself incomplete, disproportionate, and squat with them. I’ve always been convinced that my legs were stunted somehow (my sister is 6 feet 2), and on a day when I need to feel my best, a few inches’ boost from a pair of deadly stilettos is my way of correcting nature and fixing the injustice of my torso-to-femur ratio.

“But now I wondered if this attachment to the physical was somehow terribly unenlightened of me. Was I yanking the evolution of female sexual empowerment back to the age of foot binding?”

I gave it some thought and replied to the woman, “They make me feel powerful.”

Olivia continued to state that we often handicap ourselves when we’re feeling less than confident and often reject compliments when we’re feeling insecure. Being in the spotlight and one of the most beautiful women on the planet, Olivia’s flaws are pointed out; her imperfections picked at by paparazzi, any misstep splashed across the entertainment sites. It’s really not fair. Some might argue it’s the price of fame.

How does one justify how they look and feel when a single photoshoot goes from someone disparaging you for being fat and then in an article someone else says you look too thin?

What can we do when the rest of the world is tearing us down and carving away at the wall of self-confidence that we’re building for ourselves?

According to Olivia, “confidence is a state of mind, but sometimes we need to give ourselves permission to realize it.” That might be in the form of a massage or mani-pedi. It could be getting waxed or trying a new hair style. Those are the tools we have in our arsenal to look great and feel empowered.

As for the masochistic footwear Wilde was wearing when the strange lady approached her, they were abandoned as soon as she reached her apartment.

I was wearing them for me. They were my confidence trigger as I left the house and headed out into the world, and if that’s what it takes to remind myself to put the sass back in my strut and be the best version of me, then so be it.

Taking a page from Olivia Wilde, I say put on your Jimmy Choo’s and let them choke on your fabulousness.

In my article The Wisdom of Coco Chanel, even she said, “A girl should be two things: Classy and Fabulous.” It’s not about the shoes but how they make you feel on the inside and out. Naturally you are who you are but for public viewing, it’s nice to be the best version for those snapshot moments.

Maggie Smythe
Maggie is a free spirit who loves writing, sketching, fashion, and mischief-making. She loves loud music, rainbows, and shooting stars. She lives in Florida with her girlfriend and her pet goldfish, Spike.