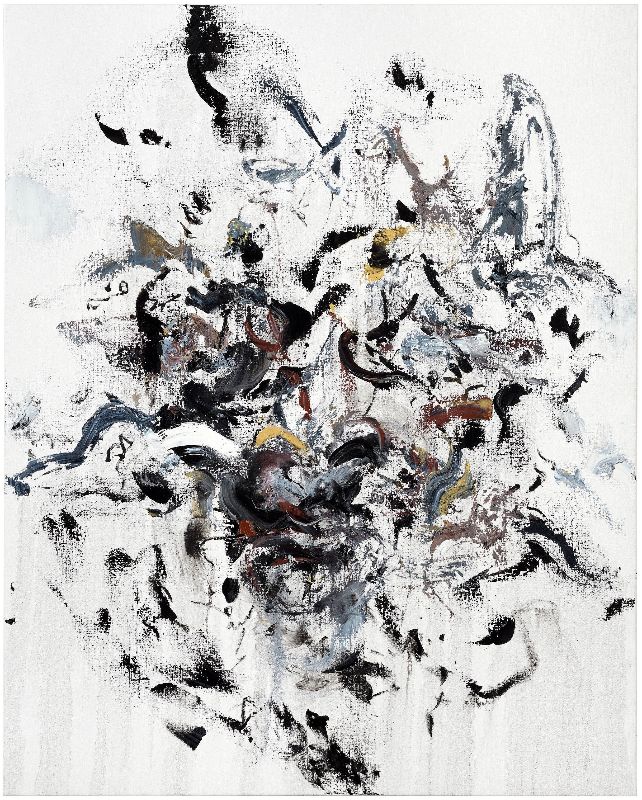 From 15th October, Marlborough Gallery presents Maggi Hambling: 2020. This exhibition of recent paintings coincides with Hambling’s 75th Birthday, marking both a moment of looking in – a self-reckoning – as much as a commentary on the world, responding to the seismic events of the present.

Hambling’s ‘twenty twenty’ clarity of vision, her search for the truth, is evident through several interconnecting series – from the exploration of her own existence to mankind’s inhumanity to man and nature.

The lockdown of spring 2020 gave rise to Self Portrait, (angry) in which the act of painting – fraught with uncertainty and chance – flickers into a metaphor for the unpredictability of the present. The artist employs a charged visual language to convey the fitful, volatile and concentrated nature of that mood. In Self Portrait, working, the artist is glimpsed, as if from the point of view of the canvas itself, as a faint grey silhouette, hemmed in by two outcrops of brilliant blue paint. Hambling recedes – almost disappears – amid the vibrancy and flux of the colour. These paintings are part of a series of recent self-portraits in which the subject is reduced – or condensed – into marks clinging to the canvas. In Self Portrait, (diptych) a note of hesitancy is struck: the artist coheres out of jumbled letters and cyphers, alongside the blank of her canvas, evincing the necessary tussle or tension between the maker and the work.

Much of Hambling’s work exudes this same sense of focus – homing in on the subject of importance, however elusive. Man-made ravages to the natural world are the subject of a series of wild animals, which follows on from her Edge series of 2017, depicting dissolving polar icecaps. Made from the imagination, these phantasmal but very much present images- including Baby Elephant abandoned, and a captive Young Dancing Bear, portray a world of alive but suffering and imperilled creatures.

Another series consists of intimate portraits of people laughing, gleeful faces materialising out of fluid paint. These works nod back in time when Hambling’s Laugh paintings of the 1990’s evoked the event – the unbounded energy, the sound – of laughter. Seen in the context of her unsentimental animal paintings, these laughing faces are double-edged – the uncontrolled release of energy in the face of adversity.

The various works and series in this exhibition are united by a sense of the artist’s compassion, self-awareness and humour – as she consistently pursues and confronts the truth.

Hambling is the subject of a documentary film commissioned by the BBC – `Making love with the paint` – made by the director Randall Wright over the past two years. The film will be premiered to coincide with this exhibition.