Mel Mack Shares Critical Lessons to Get Ahead in Your Career 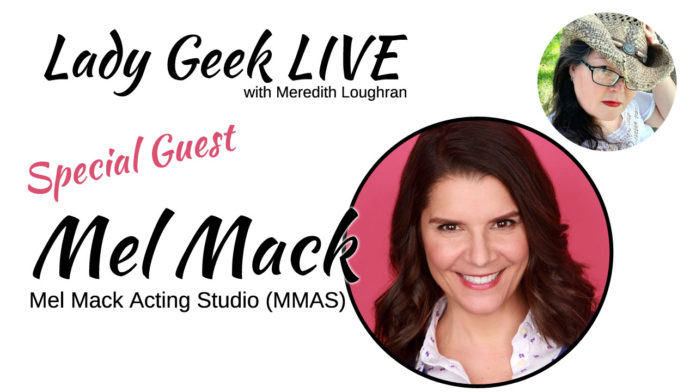 When we’re on a career path, it is vitally important to have mentors, coaches, and friends on our side. Mel Mack is one of those people that you simply want in your life because she’s giving, funny, and savvy. She’s worked in the entertainment business for nearly 20 years with television appearances in quality shows like NCIS, Criminal Minds and Will & Grace.

I had the pleasure of putting her in the hot seat during Lady Geek LIVE where she opened up about her “accidental” start in show business and the importance of being a decent human being because it can make or break you in a very competitive field.

Watch the Interview with Mel Mack

While I definitely want you to watch the interview, I’m going to highlight some of the wisdom that she imparts.

From Hooters to audition, a call back and a job, Mel literally seized the opportunity to act because she took a chance. It took some encouragement from friends who saw her potential and she’s learned some hard lessons along the way but, somewhere in the whirlwind, Mel Mack learned her craft and gained confidence during the journey.

Sometimes when you take a chance on something you want to do, you have to go all in without a safety net. How’s that for improv?

Bad stuff happens to everyone. In Mel’s case, her apartment burned up with her worldly possessions. Sometimes there are circumstances in life that beats the hell out of you and it can make or break your journey.

She could have quit but she didn’t. Adversity can do one of two things: it can make you pivot and become stronger or it can devastate you and urge you to quit.

Mel says, “Honor how you feel,” to which I will add, “then keep moving.” There are going to be plenty of times when it feels like the universe is against you. Some people fear failure while others fear success. How about striving toward a life with no regrets?

What Not To Do

Mel Mack addressed the client from hell. Here’s the thing. If you are putting yourself out there and trying to land the dream job or launch your own business, you have to treat your professional interactions professionally! Have courtesy and understand that how you handle yourself speaks volumes to those who may work with you.

Do you really want to come off as an inconsiderate jerk? No.

Some people are so self-involved that they don’t realize their behavior is hurting their career. Perception is everything, especially in the entertainment business.

I’m paraphrasing Mel, but don’t talk negatively about people in the field because professionals network and talk to one another all the time. Trust and believe that if you are negative or difficult, they will warn their friends and peers.

Let’s close out with some positive things from Mel Mack.

Mel definitely empowers her actors by sharing her wisdom and keeping a positive attitude. She doesn’t just talk the talk; she walks the walk too. If you want to get ahead in your career, surround yourself with people like Mel Mack. You need people who lift you up and aren’t afraid to get honest with you. Be willing to listen and pivot if you must.

Follow Mel Mack Acting Studio. She shares videos and testimonials from her actors who have landed jobs. In a nutshell, she has a winning program. Want more Mel Mack? See what she has to say about Creating Your Own Work.

Previous articleI Want My Life to Mean Something
Next articleWhat did I do to Deserve This?