Wild One Forever DISCOVER THE ART OF PUBLISHING
Home Motivational Moments What Do You Do When You Royally Screw Up? 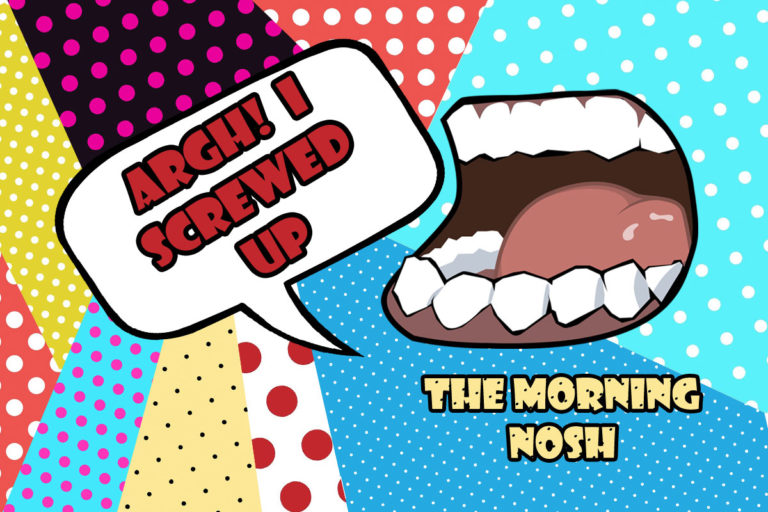 Oh man… When I screw up, I usually do a really good job of it. Hey, it happens. No one’s perfect and mistakes are part of life. How we respond and rebound from the mistake is a good indicator of one’s character, if you ask me. I want to ask: What do you do when you royally screw up?

In this episode of The Morning Nosh, I had a HUGE screw up that I remember from well over ten years ago. In a way it was kind of traumatic and horrible. To this day I still feel bad about it. This mistake is tattooed into my memory.

Well, how bad could it be?

Listen to The Morning Nosh

If you tuned in to this episode then you know that I used to work at a daily newspaper as the Coordinator of the Obituary Department. I spent the day on the phone with funeral directors and sometimes grieving families and friends of the deceased. I would write obituaries and proofread. Then I did photo toning and page layout before shipping it off to prepress.

This particular night, there were two people, unrelated with the last name of Anderson. One was an elderly white woman and another was a young black man. I put the pages together, shut down the computer and went home satisfied that my work was done for the day.

The next morning before work, as I sat at the kitchen table drinking coffee and reading through the paper I saw clearly that I had swapped the Andersons’ photos. OH. MY. GOD.

I wanted to throw up. That was bad. Like, really, really bad.

It was so bad that I wanted to call in sick. Better yet, maybe they would fire me so I wouldn’t have to explain how that happened. Here’s the thing… Once it’s in newspaper print, you cannot take it back. You cannot delete it. It’s on permanent record.

That day was probably the longest ride into work that I’ve ever had. If I wasn’t going to be reprimanded by the boss, I knew I was going to get my ass chewed by furious family members and funeral directors.

Instead of hiding and getting defensive about the how’s and why’s of what happened, I simply owned the mistake and got proactive. When I got to the office, I called the directors and asked if I could call the families directly to apologize.

Naturally, both families were very upset and I took it. I couldn’t take away what happened but I could ask them how I could make it better. I shut up and listened to what they had to say. In the end, I made any and all corrections to the death notice and even added information that they had forgotten in the first run. I explained that this mistake had prompted a new naming convention for images so it would never happen again. The funeral directors wanted a formal letter of apology and explanation for their files and that was sent that day.

And by the time the boss came over to ask me what happened, I could report that everyone was contacted, how we were going to resolve the situation and what we were doing to prevent it from happening again. All parties were satisfied…but I felt terrible about it. I still do.

The lesson here is that we all make mistakes. Own them. Learn from them. Be proactive. If you can’t take it back then find out how to make it better especially if your actions affect others.

Have you royally screwed up at work? What did you do? Send your story to meredith@wildoneforever.com and I might share your story and the lesson behind it on the air.

If you like the morning show, please subscribe and tell your friends! The Morning Nosh is on iHeartRadio.